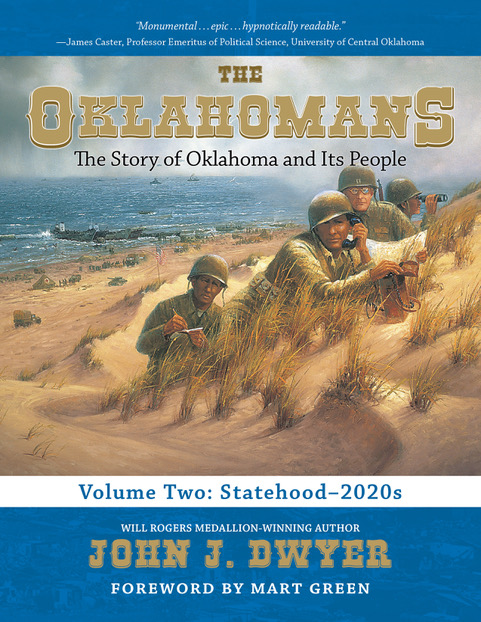 Dwyers Book a Must Buy for Oklahoma History Buffs

Tired of so-called history books whose major purpose appears to be to advance progressive political and social causes? Then you are in luck.

Scheduled for its debut to the general public on April 21 at the Oklahoma History Center is the second volume of award-winning author John J. Dwyer’ history of Oklahoma – The Oklahomans: The Story of Oklahoma and Its People. The first volume, which ran from prehistoric times to statehood was awarded the Will Rogers Medallion Award, with retired Oklahoma government and history professor, Dr. James Caster lauding it, “As fine a treatment of the subject and period as we are likely to witness in our lifetime.”

If anything, the second volume, which picks up the story at statehood and takes it up to the present with the Covid pandemic, is even better.

I have carefully read both volumes, as I was the general editor for both works. John and I were both journalism students at Duncan High School in the 1970s.

Oklahoma’s history comes alive in the hands of Dwyer, an historian and a novelist. While Dwyer makes good use of the novelist’s craft to make this 600-page book a page-turner, he does not accomplish this at the expense of the historical facts. His treatment of the 1921 Tulsa Race Massacre – or War, as Dwyer calls it, or Riot as it has also often been termed – makes the reader feel almost like he is there as the progressive black section of Tulsa, Greenwood, is virtually destroyed.

One can feel the tension mounting as respected African-American deputy Barney Cleaver gamely tried to assure the crowd of armed blacks outside the jailhouse that accused rapist Dick Rowland was perfectly safe on the top floor of the courthouse, as armed deputies were protecting him and the elevator to get to that floor was disabled.

Dwyer does not downplay the horror of the destruction of Greenwood, but if you want to know what really happened during that terrible event, you need to read this book.

Many have told me that they “never heard” about the Tulsa Race Riot when they were in school, even going so far as to argue it was a cover-up conspiracy. That is not true, as I found it covered in Oklahoma History textbooks back at least to the 1940s. Sadly, if all you know about the event is the recent version designed to advance left-wing political goals, you still haven’t heard much about it – at least not like Dwyer tells it, which is as the historical event that it was.

Dwyer’s choice of “war” to describe the tragic events is appropriate for the early part of the unhappy episode, as many of the men – of both races – were veterans of the recent Great War we now call World War I.

In the next war, World War II, Oklahoma’s 45th Division of Thunderbirds liberate Dachau. Other tragic events Oklahoma history are also covered – the dust bowl, the Murrah bombing, and the elementary teachers who shielded their young pupils with their own bodies when an F-5 tornado struck in Moore.

The Oklahoma oil industry’s history is well-documented with such names as Erle P. Halliburton, Robert S. Kerr, and Phillips and Conoco. Readers will be amazed at the oil boom, followed by the oil bust, and the collapse of Penn Square Bank in 1982. The story of Norman’s own oil tycoon, Robert McFarlin, is detailed, with his philanthropic endeavors which included the building of McFarlin Methodist Church.

Political scandals – the county commissioner scandal, for example – are well-covered, along with the impeachment and removal of two Oklahoma governors in the 1920s, and how both men tried to prevent the legislature from meeting. My dad, JL Byas, was on the grand jury in Stephens County that indicted the first of scores of Oklahoma county commissioners, and John includes a photograph of him during his army service days.

The end of legal segregation, the role Oklahoma played in the space and many other inspiring stories mark this book. This is a book you will read – and probably re-read – for years to come.

Steve Byas teaches Oklahoma History at Randall University in Moore, and is the editor of the Oklahoma Constitution.