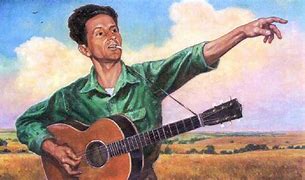 At one time the Oklahoman newspaper was a newspaper with a conservative reputation. However, since ownership passed from the Gaylord family (E.K. and his son, E.L.), and it is now part of the USA Today “network,” they have moved inexorably leftward. Case in point was an article in July, covering most of two pages, singing the praises of Oklahoma singer and songwriter Woody Guthrie, on the occasion of his 110th birthday (which was actually July 14th).

Many readers might recall the days when the newspaper ran columns by Pat Buchanan and Joseph Sobran. Those days are long gone. Today, they are more likely to use columns by neo-conservatives or ardent progressives.

According to the Oklahoman article, “(Guthrie’s) art and commitment to social justice continue to reverberate.” The article continued with a reference to his most famous song, “This Land is Your Land,” by saying, “The song – which many consider an unofficial or alternative national anthem – has been showcased at President Biden’s inauguration, during the 2017 Super Bowl halftime show and in countless grade school musical performances.”

Those newspaper columns are part of what the Oklahoman left out in its praise of Guthrie, who died in 1967. After Joseph Stalin’s Soviet Union attacked Poland in 1939, Guthrie wrote a column in an official Communist Party newspaper defending the invasion – he argued that Stalin had gone in to help Polish farmers and workers. It was one of several columns, known as Woody Sez that Guthrie penned for the Communist Party organ, People’s World.

It is unclear whether Guthrie ever officially joined the Communist Party, but he never recanted his support for Stalin. In July 1945, Guthrie wrote, “I have rolled the whole thing over in my mind and have come to believe that we need to have the CP [Communist Party] back again.” He added, “I felt when we had our Party that I had found the one organization that I could stand up and feel proud of.”

Guthrie even recalled carrying around a pocket-sized “Constitution of the Soviet Union, USSR,” adding that the “best thing” he had ever done was “to sign up with the Communist Party.”

One has to wonder if an American musician had publicly backed the invasion of Ukraine by Vladimir Putin, would the Oklahoman be praising him? Yet, the leaders of popular culture in America think nothing of honoring the ideologically communist minstrel Woody Guthrie on his 110th birthday, or at other times – even the formerly conservative Oklahoman. It used to be known as the Daily Oklahoman, but they no longer publish on Saturdays, and if something happens after 5 o’clock in the evening, you can forget about it being in the paper the following morning. Of course, that is just as well – the reporters at the Oklahoman would probably just put some liberal spin on it.

And, what about that song, This Land is Your Land, which the Oklahoman offers up as an “alternative” to our National Anthem? Guthrie wrote the song in angry response to God Bless America, the patriotic ballad by Irving Berlin. Joe Klein, a sympathetic biographer of Guthrie, said Guthrie’s son confirmed that it was “originally intended as a Marxist response” to God Bless America.

An early version of the 1940 song, This Land is Your Land, contained two additional verses not usually sung today. One verse specifically attacked the very concept of private property. The omitted verse went, “Was a big high wall there that tried to stop me. A sign was painted said: Private Property, But on the back side, it didn’t say nothing – This land was made for you and me.”

From shortly after statehood, the Gaylord family owned the Oklahoman. The founder, E.K. Gaylord, was known – and feared – by Oklahoma politicians who veered too far to the Left. After Edward K. Gaylord died in 1974 at 101 years old, his son, Edward L. Gaylord took over the newspaper and continued its strong conservative positions. But the next generation of Gaylords had little interest in continuing what their grandfather had started, and sold the publication. Now, it is in the hands of Gannett newspapers, the parent company of USA Today.

Instead of being a voice for conservatism, the newspaper is a mouthpiece for the same type of liberal stories one gets from USA Today. For example, after Oklahoma adopted what was called the most restrictive anti-abortion law in the country, the Oklahoman has run several articles which have essentially bemoaned that fact. In a recent page, letting readers espouse their views on the abortion issue, the paper did have a few words from one reader that supported the pro-life law. In contrast, five pro-abortion rights readers got to have their say.

Then came an article on how most “religious” folks really don’t have any problem with abortions, but are all for them, apparently.

One would think that a newspaper in one of the reddest states in the country would have some semblance of balance, but I suspect they get their marching orders from Gannett – push the progressive Left philosophy in the news stories and on the editorial page. Every oddball left-wing position seems to get plentiful and favorable coverage from today’s Oklahoman.

That is balance from today’s Oklahoman. Nothing was mentioned in the positive article about the pro-Communist views of Woody Guthrie – an avowed Stalinist. Not one word about his writing for a Communist Party newspaper, or his praise for Stalin. Nothing about Guthrie’s song, This Land is Your Land’s opposition to the concept of private property.

And it is not just the abortion issue. The Oklahoman now runs stories and editorials favoring more gun control laws, for example.

I am sure that the Gaylords would not approve of the progressive Left swing of their family’s newspaper. But if Woody Guthrie were alive today, perhaps he could write for the Gannett-version of the Oklahoman. He would fit right in.