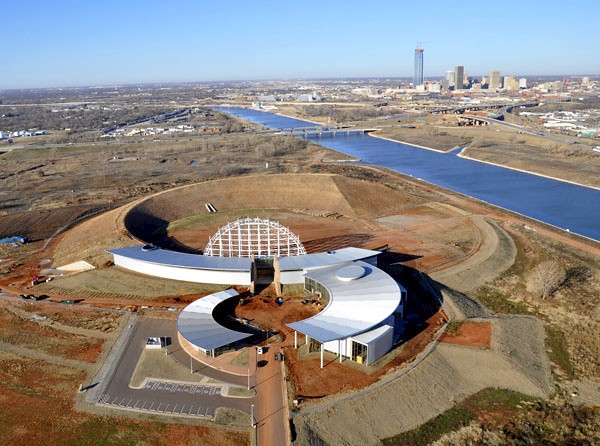 The First Americans Museum (FAM) on the banks of the Oklahoma River in Oklahoma City celebrated its grand opening on September 18. The museum includes state-of-the-art exhibits on Native American history and culture. The facility also has both a full-service restaurant and an express cafe offering Native-inspired cuisine. The museum store features a selection of jewelry, basketry, pottery, textiles and souvenir items. The opening ceremony included remarks from museum, city, and tribal leaders along with a procession of representatives of all 39 Tribal Nations in the state of Oklahoma. It was the culmination of over three decades and tens of millions of state tax dollars.

The idea to create a Native American cultural center in Oklahoma City began in 1990 when the Oklahoma Tourism and Recreation Department, working with a intertribal task force, developed the concept for a Indian cultural center. In 1994 the Oklahoma Legislature and Gov. David Walters approved legislation creating the Native American Cultural and Educational Authority (NACEA) and authorized it to design, construct, and operate an American Indian Cultural Center and Museum (AICCM). The mission of the project was to communicate the story of the tribes that have a historic relationship to Indian Territory and the state of Oklahoma. The project site at the I-35/I-40 interchange was selected and The City of Oklahoma City donated the land for the development in 1998. The following year, the state approved a $5 million bond issue to get the project started.

In 2004, the NACEA board chose the “Vision Plan,” which was the most elaborate and expensive of the options provided by the project architects. In May 2005, the state approved $33 million in bonds for construction. When funds started running out in 2008, the Legislature passed another $25 million bond issue. In addition to the land, the City of Oklahoma City contributed $4.9 million. Indian tribes and private sources contributed another $6.7 million. By 2010, the authority was again out of money, but kept going with a $6 million allocation from the Obama administration’s American Recovery and Reinvestment Act.

Construction stopped again in 2012. Before the 2013 legislative session, NACEA announced their plan: “We are currently preparing to return to the Oklahoma Legislature to pursue funding for The Center. We will be seeking $40 million to match pledges of $40 million in private, tribal and local government support.” In May of 2013, proponents were just days away from getting the $40 million in state funds when a deadly EF5 tornado passed through south Oklahoma City and Moore, killing 24 people and injuring 212 others. Lawmakers ended up passing several items to aid in the tornado recovery efforts, including a $45 million relief package for victims. Legislative leaders placed the funding measure for the center on hold.

Finally, in 2015, the Legislature authorized a $25 million bond issue – on the condition that Oklahoma City take over responsibility for the project. Gov. Mary Fallin signed the bill into law. In 2016, the Oklahoma City Council accepted the proposition. The city was about to reject the state plan before the Chickasaw Nation came with a proposal to bring $20 million or more in tribal funds to the project. The offer by the Chickasaw Nation included up to $14 million to cover operating shortfalls in the museum’s first seven years.

Construction resumed in 2018 and the project was completed this year. In 2019 the Native American Cultural Center and Museum was rebranded as the First Americans Museum.

David Deming on Why Fossil Fuels are Here to Stay